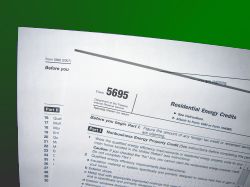 A solar tax credit is a financial incentive given by Federal and state governments to help make solar energy more affordable for homeowners.

Keep in mind that a tax credit is better than a tax deduction.

In the United States, the Federal government offers a solar energy tax credit for the following solar technologies...

Up to 30% of the cost of the system can be claimed by the taxpayer up to the following maximum amounts...

This credit is available for systems placed in service from January 1, 2006, thru December 31, 2016. You can claim this tax credit using IRS Form 5695, Residential Energy Credits.

In addition to the Federal Renewable Energy Tax Credit, many states offer a tax credit for solar power that you may be eligible for

The technologies eligible for state tax credits for solar energy include...

You can find out if your state offers a solar energy tax credit and which solar technologies are eligible by searching the Database of State Incentives for Renewables and Efficiency (DSIRE).