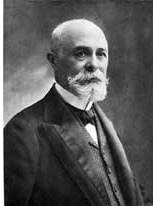 In 1839, 19-year old French physicist Alexandre Edmond Becquerel discovered that certain materials would produce small amounts of electric current when exposed to light. This basic physical process of using light to generate an electric current is known as the photovoltaic effect.

However, it would be more than 100 years before engineers would develop a photovoltaic cell capable of converting enough solar energy into electricity to run electrical equipment.

The breakthrough came in 1954 when physicists at Bell Labs discovered that a Silicon semiconductor was able to convert light into electricity with 4-6% efficiency. Compared to earlier materials which were less than 1% efficient, this was a major accomplishment.

Semiconductors are the Key

Note: An understanding of basic electricity is needed to fully understand this section. Take a look at our Solar Power Electricity page if you need to refresh your knowledge in this area.

Semiconductors are the key to PV solar power. To understand why, let's take a look at the characteristics of solid matter.

There are three types of solid matter...

First, you need to have a circuit. A circuit is simply a path for electrons to move on. The circuit creates a continuous loop which includes our semiconductor. The circuit will be made with a conductor such as copper wire.

Now we have all the pieces to the photovoltaic solar energy puzzle, so let's put them together! 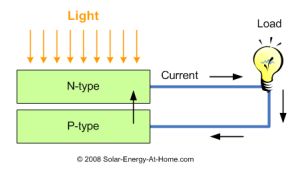 Find Out More About How Photovoltaic Solar Power Is Used

For more information on solar cells, take a look at our solar cell page. From there, you can go to our solar electricity page which will explain about the different types of photovoltaic solar power systems you can use in your home.