Solar space heating uses solar thermal energy to heat the space inside a building. Heating with solar energy can help you lower your home's heating bills and reduce your dependence on fossil fuels such as oil, propane, and natural gas.

There are two general types of solar space heating systems, passive and active. 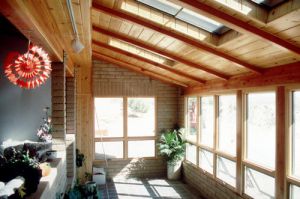 In homes that use passive solar energy for space heating, the whole house acts as a solar collector. This is done by positioning and designing the home and the landscape elements in such a way as to take optimal advantage of the solar energy that reaches the home.

For example, having most of your home's windows facing south will enable your home to have maximum exposure to the Sun's radiant energy.

Storage of the solar heat that has been collected is possible using thermal mass. Thermal mass is material that can absorb the heat, store it, and then slowly release it after the sun sets. Materials such as brick walls, concrete slabs, and tile floors are examples of thermal mass.

Distribution of the heat throughout the house is handled by natural means through convection, conducton, and radiation. 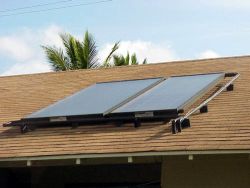 Homes with active solar energy systems for space heating use mechanical equipment such as pumps, fans, and blowers to help with the collection, storage, and distribution of heat throughout the house.

The solar collectors used in liquid space heating systems are the same as those used for domestic solar water heating. The most common type of solar collector used is a flat-plate collector, but evacuated tube and concentrating collectors are also used.

To capture the solar energy, a heat-transfer fluid, such as water or antifreeze, is circulated through the solar collector by a circulating pump. As the fluid flows through the collector it is heated by the Sun. A controller is used to operate the pump such that the heat transfer fluid's temperature is only increased by 10-20 degrees F.

There are several ways the solar thermal energy can be distributed throughout your home. They all use the same basic principle of circulating heated water through pipes, then along the way, the water transmits its heat and returns to the storage tank as cooler water ready to be reheated.

Here are some of the distribution methods you can use with liquid systems...

The solar collectors used in solar air heating systems use air as the fluid for capturing the solar thermal energy and transferring that heat to your living space.

In the most common setup, the collector draws cool air from the house, heats it, and returns the now heated air to the living space. This is called a closed-loop system.

The other type of setup is called an open-loop system. Open-loop systems draw in cold outdoor air, heat it, and then transfer it to the living space.

Distribution of the heated air is handled by fans or blowers. A temperature sensor inside the collector monitors its internal temperature. When it reaches 110 degrees F, it sends a signal to a thermostat inside the home. If the temperature inside the home is below the desired level, it turns on the fan.

When the internal temperature of the collector falls to 90 degrees, or the living space reaches the desired temperature, the thermostat turns off the fan.

Storage can also be handled with rock bins. A blower circulates the warm air from the collectors to a bin of rocks which will absorb most of the heat. When the home requires heat, it is pulled from the rock bin. However, one of the challenges with rock bins is that they must be kept dry to avoid mold, mildew, and insects. This is one of the main reasons why this type of storage is rarely used today.

What Are You Waiting For?

Solar space heating systems can significantly reduce your heating bills. In addition, they will also reduce the amount of greenhouse gases that you produce from using fossil fuels. A definite Win-Win scenario.

With a number of solar energy tax credits, rebates, and grants available to reduce your implementation costs...

What are you waiting for?