What is Solar Energy Anyway?

The Source of Solar Energy 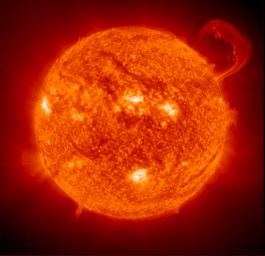 To get technical, solar energy is the radiant energy that the sun produces. This is the result of a process called nuclear fusion - the joining of smaller atoms to form a larger atom.

The sun is a giant ball of gas consisting primarily of hydrogen and helium. Through nuclear fusion, hydrogen atoms in the sun's core combine to form helium atoms over and over again.

The Law of Conservation of Energy

Does this mean that some matter is "lost" during the nuclear fusion process?

No, it isn't really lost.

Due to the law of conservation of energy, this "lost matter" is converted into the radiant energy that the sun emits into space.

You now have the answer to the question, "What is solar energy?" Let's take it a step further and see how solar energy travels to earth.

One misconception about the solar energy that reaches earth is that it includes the heat from the sun. In fact, the earth doesn't receive any heat from the sun since it's more than 93 million miles away! What actually happens is that when the radiant energy from the sun is absorbed by an object, its energy is converted into heat.

The sun produces a tremendous amount of energy. Every second, more than 4 million metric tons of hydrogen is converted into helium. But even at this rate, the sun will continue producing solar energy for another 5 billion years! As a result, solar energy is considered the ultimate renewable energy.

Home > What is Solar Energy