One of the key components of a residential solar energy system is the solar power inverter.

Home solar power systems can be used to provide power for many standard electrical devices and household appliances. But in order to provide this power, these systems require solar inverters.

What is a Solar Inverter

For more information about the basics of electricity, take a look at our page on...

But why is a solar power inverter needed in the first place?

Well, a solar inverter is needed because the electricity generated by your solar panels is DC electricity. In order to use the generated solar power with your electrical devices and household appliances, it needs to be converted to the standard voltage AC electricity for your region.

Solar inverters can be categorized by the type of solar power system they are used with...

A Grid Tie Inverter is used with a grid-tied PV system. This type of solar power inverter takes the DC electricity generated by the solar panels and converts it to AC electricity directly. It channels the AC electricity to your home's breaker panel where it is either used by your household loads or, if you are signed up for net-metering, sends it to the utility grid.

An On/Off Grid Inverter is used with a grid-tied PV system with battery backup. This type of inverter allows you to connect your home to the utility grid and use power from a battery bank. Unlike a pure grid tie inverter, this type of inverter is able to continue transferring power to your home when the utility has a blackout. During a blackout, a grid tie inverter will not be operational.

Three factors homeowners should consider when evaluating inverters are... 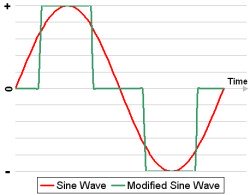 This is considered "clean" power and is suitable for all household electrical applications such as computers, televisions, and microwaves. It is the same type of power provided by the utility companies.

Some solar power inverters generate "dirty" power. This type of inverter converts the DC electricity into AC electricity that is in the form of a stepped square wave and is known as a modified sine wave inverter.

The AC electricity generated by this type of inverter can have a noticeable impact on your electrical equipment's performance. For example, audio speakers will buzz, microwaves will take longer to heat food, and television and computer monitors will display rolling lines.

The amount of power the inverter can handle is known as it's power rating. Two critical power ratings you will need to understand for your inverter are it's continuous rating and it's surge rating.

Household loads such as refrigerators and washing machines may require a short-term boost in power to get started. The amount of power can be 2 to 3 times the normal operating power, so make sure to check that your inverter's surge rating can handle that amount of power for a few seconds.