Solar Electricity For Your Home

Imagine using the power of the Sun to generate your own residential solar electricity! 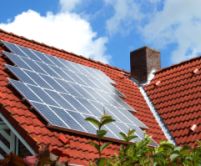 For homeowners, this can all be accomplished by installing a photovoltaic solar power system.

What is a PV Solar Power System?

A PV system converts solar energy into solar electricity for use by electrical devices in your home. It is made up of three subsystems.

The Load is simply the device that uses the electricity. Your refrigerator is a good example of a load.

The BOS consists of all the equipment between the PV devices and the load. It includes the structures for mounting the PV devices, the power conditioning equipment to convert the DC electricity to alternating-current (AC) for use by the load, and batteries for storing the PV generated electricity if desired.

If you want to learn more, check out Solar Electricity Basics.

The solar cell is the basic building block of a PV system. It converts solar energy directly into electricity through a process known as the photovoltaic effect.

An individual solar cell doesn't generate much power. The amount varies, but it is around 1 or 2 watts. But you can increase the solar power generated by joining them together into a larger unit called a PV module. PV modules are also known as solar power panels. The power output of a PV module ranges from 10 watts to 300 watts. To generate even more power, PV modules can be combined to form a PV array.

A PV array can consist of any number of modules. This modularity makes photovoltaic systems very flexible. They are able to meet any electrical requirement, whether the amount of power needed is small or large.

But to take advantage of the electricity produced by a PV array, you need a few more components...

The BOS components enable the solar electricity to be properly applied to the load.

The exact BOS components you need will depend on the type of PV system you install.

The three most common types of photovoltaic systems for residential solar power are...

For most people, a grid-tied PV system is the ideal configuration.

You get all the benefits of using your own solar electricity as well as the benefits of being connected to the grid. It is also less expensive than other types of PV systems.

A grid-tied PV system can also be supplemented with a battery backup.

Why would you need a battery backup since you are connected to the grid?

However, if your PV system includes a battery bank, during a power outage you can utilize the energy that your PV system produced and stored in the batteries.

A grid-tied PV system with battery backup is ideal if you live in an area that has unreliable power from the grid or that experiences power outages due to natural disasters.

Stand-alone PV systems are designed to operate independently from the grid and to provide all of the electricity you need for your home.

If you have a home that is in a remote area that doesn't have utility grid service or where it would be very costly to have power lines run to your home, a stand-alone PV system would be ideal.

This type of PV system is also desirable if you are looking to go completely green with your source of electricity.

As you can see, home solar power systems give you a flexible way to harness power from the sun to generate your own pollution-free, cost-saving solar electricity!