The solar cell is the basic component of residential solar panels.

Home solar power systems rely on solar power cells to convert sunlight into solar electricity. The science behind solar cell energy is based on semiconductor technology.

Photovoltaic cells are made out of materials known as semiconductors, usually silicon. A semiconductor has the properties of an insulator, but when exposed to light or heat is capable of conducting electricity.

However, in order to generate solar electricity, the silicon used for the semiconductor needs to be treated by a process known as "doping." Doping simply mixes an additional chemical element with the silicon to create either a positively charged or negatively charged layer of silicon.

A solar power cell consists of two layers of this treated silicon. The bottom layer is positively charged (P-type) and the top layer is negatively charged (N-type). The two layers form an electric field between them which only allows the electrons to flow from the P-type silicon to the N-type silicon. When the solar power cell is part of an external circuit, this will allow it to generate solar electricity when light strikes the top silicon surface.

Note: For more details about converting sunlight into solar electricity, take a look at our page on Photovoltaic Solar Power. 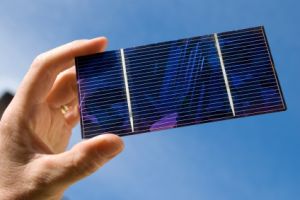 There are three primary types of photovoltaic cells made from silicon:

Monocrystalline PV Cells are made by slicing thin wafers from a single long silicon crystal rod. These cells are highly efficient (15-18%) but expensive to manufacture due to the long, expensive process of creating silicon crystals and the high grade of silicon used. 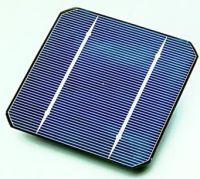 Polycrystalline PV Cells are made from more than one silicon crystal. They are formed when molten silicon is poured into a mold and cooled to form an ingot. The ingot is then cut into smaller sections, each of which is then sliced into thin wafers. 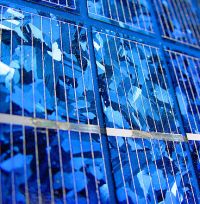 The Physics of Solar Cells

Amorphous Silicon is the oldest thin film solar cell technology. It is a silicon alloy that is deposited directly onto the backing material, usually either glass or metal. Compared to crystalline photovoltaic cells, amorphous silicon is less efficient (5-6%), but the material costs and manufacturing costs are also much lower.

An individual solar cell will only produce about 1 or 2 watts of solar power electricity. For most home uses, much more power is needed. To meet that need, solar power cells can be joined together to create a solar module or solar array. These are commonly referred to as solar panels.