Solar thermal energy is one of the most cost effective forms of green energy.

A solar collector captures the radiant energy from the Sun and converts it into heat.

How does a solar collector convert solar energy into heat?

By taking advantage of a process known as the greenhouse effect.

Once that heat is captured we can put it to good use! But in order to use it, you first need to understand some of the basic principles of heat... 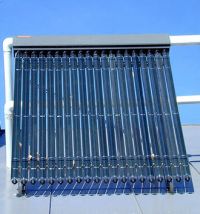 Heat is simply a form of energy associated with the motion of molecules.

When the electromagnetic waves coming from the Sun hit an object, they excite the molecules of that object causing them to move. This molecular movement is heat.

Heat is always moving from higher to lower temperatures until the temperatures are equal. This is known as heat transfer. If you place two objects next to each other, the warmer object will cool down as its heat is transferred to the cooler object. The cooler object in turn will warm up.

To really understand solar thermal energy, you need to understand about heat movement. This is especially important for passive solar energy applications.

There are three basic physical ways that heat moves...

Convection is the transfer of heat by a moving fluid, usually air or water. Natural convection is caused by the heating and cooling of the air in a room as it contacts objects. As air is warmed, it expands resulting in it having a lower density than the cooler air around it. Since its density is lower than the cool air, it will rise. As the air cools, it's density increases and it will sink, starting the process all over again. This movement of air is known as a convection current.

Radiation is the direct transfer of heat through space by electromagnetic waves coming from a warmer object to a cooler object. Heat radiates in all directions from a warm material and will warm all surfaces that are in direct line of sight of the material. Most objects that block visible light will also block radiant energy. You've experienced this when you move into the shade on a hot summer day to cool down. You are moving out of the direct line of sight of the Sun's radiant energy, and as a result, you get cooler.

Now that you understand the basics about solar thermal energy, take a look at the different solar heating applications that you can use for solar home heating...