A Basic Definition for Global Warming is,  "The Gradual Increase in Temperature near the Earth's Surface"

Global warming is a term that many hear but few understand. Most know that it is a problem with the environment but they aren't sure what it means.

This page will build on the basic definition for global warming to give you a better understanding of what it is, what is causing it, and some of the effects it can have on you.

What is Global Warming?

First, to understand global warming, it is important to realize that it is just one form of climate change our planet is experiencing. Climate change refers to major changes in temperature, rainfall, snow, or wind patterns that last for an extended period of time.

Global warming itself is the gradual increase in average temperatures near the Earth's surface.

Global warming can occur for many reasons, both natural and man-made. Today, global warming often refers to the warming that can occur due to increased emissions of greenhouse gases resulting from human activities. 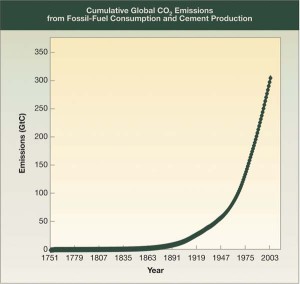 The Industrial Revolution began about 200 years ago. Since then, the burning of fossil fuels, such as coal and oil, and deforestation have caused the concentrations of greenhouse gases to increase significantly in our atmosphere. Greenhouse gases prevent heat from escaping into space, similar to the glass panels of a greenhouse, resulting in global warming.

While nature does have its own warming and cooling system that has been in use since the dawn of the planet, humans have interfered with the system. Many people say we haven't produced enough pollution to affect the environment. Unfortunately, you don't need a lot, it's a delicate system, and just like any other delicate system, a small nudge can cause massive side effects.

Our planet has many ecosystems which support all life on Earth. An ecosystem can be defined as a grouping of various species of plants, animals, and microbes interacting with each other and their environment. When one ecosystem changes, it can impact other ecosystems.

The effects of global warming can be disastrous, but not always warm like people think. When the atmosphere warms up weather patterns change, these include winter patterns as well. Depending on how the atmosphere changes, some areas may get snow where there has previously been none, and others may experience warm winters. All it takes is a few degrees to knock everything off balance.

This small heating effect of global warming can also interfere with proper crop production. Since some areas are warmer or colder than they should be, certain crops will no longer grow. A few degrees increase in ocean temperature can also make hurricanes much more powerful. Sea levels also begin to rise as ice at the polar caps is melted, and wildlife that rely on yearly ice for their habitats have nowhere to go.

How You Can Help?

There are some things that people can do to help fix the problem. Making our homes more energy efficient and using renewable energy sources like solar energy are two actions homeowners can take. Understanding the facts on global warming can help you make positive choices for the Earth.

The problem of global warming is a very real one. While we all may not agree on it, the fact is we need to take better care of our planet. After all, we can't leave Earth yet so if we mess it up, we're stuck with it. Many people also forget that we are just as frail as the ecosystem we rely on. I hope this expanded definition for global warming has helped you better understand this issue.